Rotary lobe pumps have been in industrial use since the late 1800’s.  They were invented by the Roots Brothers around 1860.  The brothers were looking for a way to build a more efficient “water motor” for a mill.  When they were working on it, one of the brothers rotated the shaft, and it blew the other brother’s hat off.  A superintendent of an iron foundry saw this, and said that would be helpful in smelting iron.

From there the Roots Blower Company was started and it sold “Roots Blowers” to iron foundries and for mine ventilation.  The applications that rotary lobe blowers has since expanded to many different applications, and hundreds of different companies make them.  They’re often still called “Roots Blowers,” and that company still exists today as a part of General Electric.

Rotary lobe pumps are used in a wide variety of applications, and not just in compressed air.  The first engine supercharger was a rotary lobe pump.  Interestingly enough, one of their most common uses is in mills, though not as the original Roots Brothers had intended.  Rotary lobe blowers are nearly in every industrial grain, rice or flour mill, but they’re used for pneumatic conveying.

Rotary lobe pumps are positive displacement pumps.  However, unlike the technologies we’ve covered before, no compression happens inside of the pump.  There is reduction of volume to create pressure, but it’s not inside the pump.

So how do they compress air? 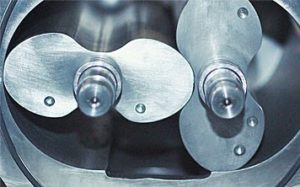 Inside the pump housing you’ll have two rotors that each have either two or three lobes.  If the rotors have two lobes, they are shaped like the number 8.

If the rotors have three lobes they look like this:

Rotary lobe pumps with more than three lobes do exist, but as far as I know they are not used in compressed air.

One of the rotors is driven by the motor or engine and the other is geared to the driven one.  When one spins, the other spins in the opposite direction with very precise timing and clearances.

Air is sucked into the inlet, and it is forced around by the lobes, and then pushed out of the discharge.  A very small amount can escape back through the clearance in the rotors, and this is called the “slip.”  The slip is why blowers are only used for very low pressures.

When the air is discharged out of the pump, this is when the volume reduction occurs occurs.  The air gets forced down the pipe.  Unlike the other positive displacement pumps we’ve covered, that take a fixed amount of air and gradually reduce its volume to increase pressure, the rotary lobe pumps takes a fixed volume and continually forces more air into it to increase pressure.

The amount of pressure a rotary lobe pump can produce is very small compared to what a piston or screw pumps can do.  They’re referred to as blowers, because they produce low pressure at a high volume.  They’re also used for high volume, light vacuum applications.

Pros:
1.  Can produce a very high volume of air.

2.  Very little maintenance – the compression chamber is oil-free, so you only have gearbox oil and maybe an air filter or silencer to change.

3.  Plug and play – most manufacturers make the pumps to fit in the same spot as the other brands.  Additionally these standard designs have been around for decades.  So you might have a blower system from the 50’s, and most likely you can buy a new pump and it will drop right in the system with no modifications and perform the same.

1.  Limited pressure range.  They can only give you about 15 psi.

2.  They’re not always the most  energy efficient, due to the slip.  Sometimes other technologies can out perform it.

3.  Loud.  Usually it’s not big deal, because these are in industrial environments where the noise doesn’t matter.  However, you can put a silencing box around them or add silencers to reduce the noise.

If you have an application that needs below 15 psi of air, a large volume of air, and you have a dirty or dusty environment, a rotary lobe pump is often a good choice.  As always, when sizing any application, contact your local compressed air expert.