Reciprocating compressors are commonly called piston compressors.  You see them everywhere.  Any automotive place will have them for sell, Home Depot and Lowe’s have them in the aisle.

We stated in the last post that reciprocating compressors are positive displacement compressors that use a piston in a chamber called a cylinder to decrease the volume and increase the pressure.  That was then broken down into double-acting, single-acting, and diaphragm.  They’re called “reciprocating” because the piston goes back and forth in a reciprocal motion.  They’re also called recips for short.

The engine in your car uses the same principle, but in reverse.  The combustion of the gas pushes the piston, instead of the piston pushing the gas.

These are the ones you are probably most familiar with.  Here is what they do: 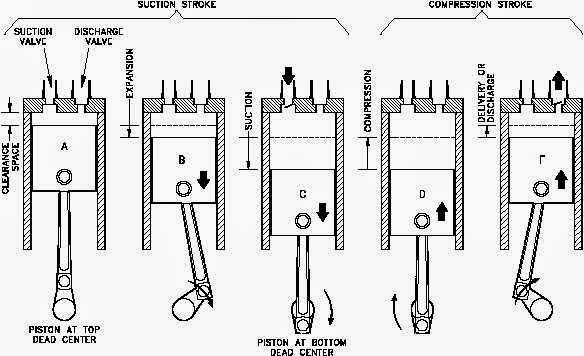 There is an inlet or suction valve and a discharge valve.  Both are one way valves, and both are spring loaded so it takes a certain amount of force to open them.  The inlet valve will only let air come into the cylinder and the discharge valve will only let air out.  As the piston moves downward through the cylinder, air is sucked in the inlet valve.  When the piston moves up through the cylinder the inlet valve closes and the discharge won’t open until a certain amount of force is applied.  This causes the air to be trapped inside while the volume is reduced, increasing the pressure.  When the pressure is enough to open the discharge valve, then the air goes out at the higher pressure.

Single-acting recip compressors only have valves on top of the cylinder, so there is one compression cycle for every turn of the crankshaft.

These are the air compressors you see everywhere:

One of the reasons is that they are inexpensive when compared to the other technologies.  Also, they are great for intermittent duty cycles.  Compared to a rotary screw, they usually have less maintenance and are easy and simple to maintain.  It makes them a great choice when your compressed air use is below 100 CFM, and you need 40 psi or more.

ing recip compressor are similar to single-acting, but they have inlet and discharge valves on both sides of the cylinder.  This gives you two compression cycles for every turn of the crankshaft.

Double-acting recips are some of the most efficient compressors ever built, but they’re not as common as they used to be.  They’re still around, but they’re extremely large.  You rarely see one under 100 hp.  Back in the days, they used to be called earth-movers, because being around one felt like you were in an earthquake.  If the compressor didn’t have the right foundation and vibration isolation, it could tear down the building it was in.  These used to be the workhorses in manufacturing plants, but in the last 20-30 years that role was taken over by rotary screw compressors.

The diaphragm compressor is similar to the single-acting recip.  The difference is that instead of a piston moving inside of a cylinder, the piston moves a diaphragm that contracts and expands.
When talking about compressed air, diaphragm pumps are somewhat of a niche market, so you won’t see many.  However, this technology is very popular for other types of media.

Back to single-acting reciprocating compressors……..

Because they are the most common ones in the recip category, the rest of this blog post will be about them.  Some of the material is applicable to the other technologies, and some may not be. 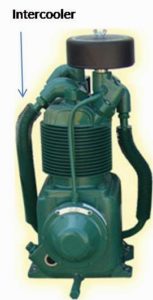 Often recip compressors have multiple stages.  This is not to be confused with multiple cylinders.  A compressor can multiple cylinders, but only be one stage.  A multiple-stage compressor pumps up the air to one pressure, and then uses another cylinder with a smaller diameter to pump to a higher pressure.  Normally the air is cooled in between the stages with an intercooler.  This intercooler is a finned tube that runs from one head to another or to one side of the head to the other.  Sometimes you’ll see a full heat exchanger, that looks like a radiator.

Again, you can not tell how many stages a compressor has just by counting the number of cylinders.  A compressor could have 20 cylinders and still only have one stage.  What makes it multi-stage is if it has different size cylinders (inside diameter).  If all the cylinders are the same size, then it’s single-stage. 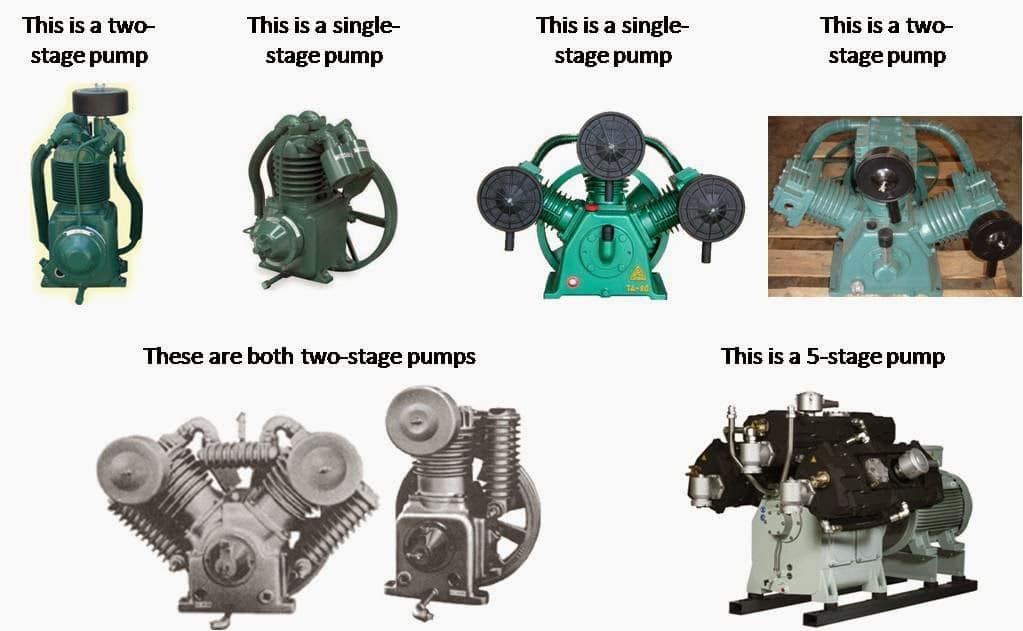 So why would I need a single-stage or two-stage pump?

Don’t worry about how many stages a compressor has; just look at the pressure it gives you.  The manufacturer will put in the appropriate amount of stages to get the desired pressure.  Don’t go into the compressor shop asking for a singe-stage or a two-stage compressor – or any specific stage, for that matter.  Tell them the psi you need (along with CFM, which is a different discussion).

A two-stage pump can get to a higher pressure than a single-stage pump of the same design.  Normally with single-acting recips the max pressure for a single stage is about 125 psi.  With two stage you can get up to 175 psi with a splash-lubricated pump or 250 psi with a pressure-lubricated pump.  Although some specialized two stage pumps can get all the way up to 580 psi.

Most customers looking for a small single-acting recip, usually don’t need more than 90 psi, unless they’re filling truck tires.  For the same size horsepower, a single-stage will give more CFM than a two-stage.  However, most of the ones you see out there, in the industrial 5hp and above range, will be two-stage.  As a distributor it’s more economical for us to stock the 2-stage, and the difference in CFM is minimal.  We cover all the bases with a 2-stage.  For the really small compressors, below 5hp, you’ll nearly always see single-stage.

Oil-lubricated piston compressors are by far the most common in the 5-30 hp range.  We’ll go more into the purpose and benefits of lubrication in another week, but unless you have medical air application and a few other special applications, then oil-lubricated is most likely better for you. 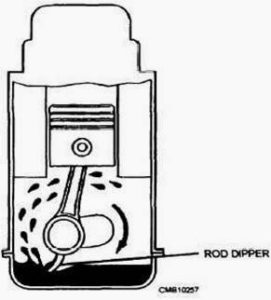 A splash lubricated compressor uses a dipper on the end of the connecting rod.  When the crankshaft turns, usually between 400 and 1000 rpm, the dipper splashes into the oil, causing the oil to distribute throughout the lower end of the pump.  Most of the ones you’ll see are splash-lubricated.  It’s a very simple and effective method of lubricating the pump.  It’s also inexpensive to manufacture so it keeps the initial cost of the compressor down.  In nearly all cases, splash-lubricated recip should only have a duty-cycle of about 60%.

A pressure lubricated compressor uses an internal oil pump to 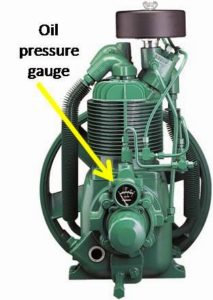 force the oil up the connecting rod to make sure key parts of the pump are lubricated.  The pump will require a certain oil pressure in order to run.  You’ll see an oil pressure gauge on the pump to indicate the oil pressure.  Some have an oil-filter on it and some do not.  However, if you see an oil filter or a gauge on the pump crankcase, then you’re looking at an pressure-lube pump.  A pressure-lubricated pump may also used a dipper to splash oil around, as well.  Pressure lubricated pumps can sometimes be rated with a 100% duty cycle (depends on compression ratio).  Pressure-lubricated pumps on average will last longer and have a higher duty-cycle than splash-lubricated pumps.  However, they usually cost a lot more.  You get what you pay for, so you’ll have to balance initial cost versus reliability and duty-cycle.

So now let’s look at duty-cycle when it comes to sizing a compressor.  If you plan on getting a compressor for your business, you’ll be using it all day, and you need 15 CFM pretty much all day.  If you’re looking at a splash-lube piston compressor, you need to take that 15 CFM and divide by 40%.  That gives you 25 CFM.  Your typical 5hp piston is about 18 CFM.

If you bought the 18CFM splash-lube piston based on the fact you needed 15 CFM all day, you’d break the pump in about 6 months, maybe a year.  You need the 7.5 hp piston which is about 25 CFM.  Alternatively you can get a 5hp rotary screw that’s 20 CFM.  A rotary screw has a 100% duty-cycle, but it will cost several times more initially.  You could also get a pressure-lube 5hp piston, which could most likely handle the high duty cycle.

If you just need a quick burst of 15 CFM that last an hour or less, then you’d be fine getting the splash-lube based on that CFM.  However, if you needed a sustained flow for several hours, you need to account for the duty-cycle of the pump.

This is a common mistake that many companies make.  Your compressor company should be trained to recognize that situation, so that’s why for your business you should get assistance from a compressor company with professionally trained sales personnel.  Home Depot has “home” in the title, and the compressors there are built for that market.  You’ll often see in the fine print that the warranty is reduced to only 3 months if you take a home compressor and use it for your business.  The reason is duty cycle.

I’m not singling out Home Depot; the same is true for their competitors.  There’s nothing wrong getting a compressor from a big-box store if you’re using it at your house – you probably don’t need an industrial compressor for your garage.

A “home depot” compressor will probably work just fine for your home.  For your business, however, you should come to the professionals and let them size the compressor correctly for you.

That’s about all for now on reciprocating compressor basics.  Next post we’ll cover rotary screw compressors.