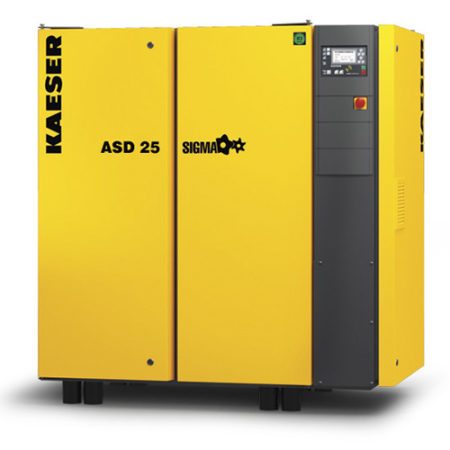 Rotary screw compressors are the workhorses behind a majority of manufacturers worldwide.  If you see a big building, and they make stuff there, there’s a good chance there is a rotary screw air compressor powering their manufacturing process.

There is a good reason for this.  An industrial rotary screw compressor has a 100% duty cycle.  It can run 24/7 without a break, and in fact it usually works better and lasts longer when it’s used that way.  A piston compressor normally works better when it can take a break – it likes a intermittent duty cycle.  However, the rotary can go all out, all day without stopping – it doesn’t like starting and stopping constantly.

Let’s talk about how they compress air.

A typical rotary screw air compressor has two interlocking helical rotors contained in a housing.  Air comes in through a valve, typically called the inlet valve and is taken into the space between the rotors.  As the screws turn, they reduce the volume of the air, thus increasing the pressure. 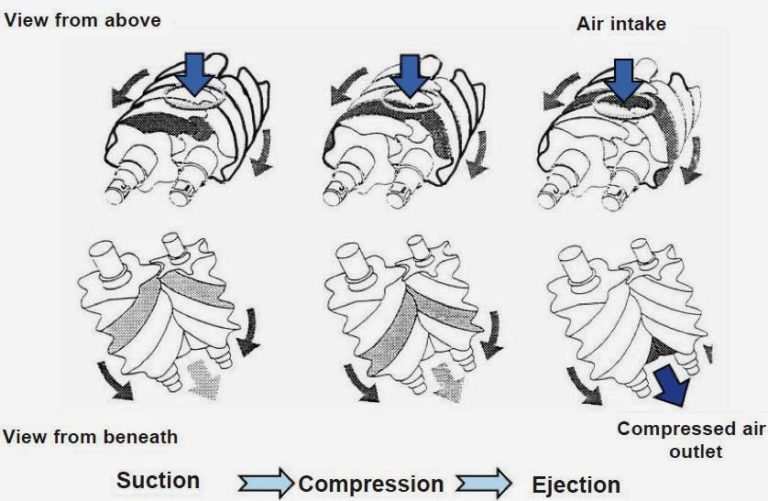 There are rotary screw air compressors with just one screw, as well.  However, they’re not very popular when it comes to compressing air.  You’ll see them more in refrigeration applications.  Their principle of operation is beyond the scope of this blog, but if you’re interested, you can read more here.  For the rest of this blog post, it can be assumed that we are talking about compressors with more than one screw.

The assembly that includes the rotors and the housing they’re in is called an “air end” or airend.  This is the terminology for all rotary compressors, whether they be rotary vane, scroll, screw or lobe – the part that compresses the air is called the airend.

Rotary screw compressors can either be oil-flooded or “oil-free.”  Oil-free is in quotation marks because oil-free compressors don’t provide oil-free air (there’s oil in the air around us).  However the difference is that with oil-free rotaries there is no oil in the compression chamber.

In an oil-free rotary screw compressor a set of gears controls the timing between the male and female rotor.  There is no oil to seal the chamber, so without multiple stages you cannot achieve as high as a pressure as you can with an oil-lubricated one.  Additionally there’s no cooling oil, so they run hotter, and that decreases the efficiency.  Because of this oil-free rotary screw compressors are usually limited to special applications, or they are two-stage.  There are some oil-free compressors that use water as a coolant, but those are rare.

There is so much more to a rotary screw compressor than the airend.   Let’s take a look at the typical oil-lubricated rotary screw: 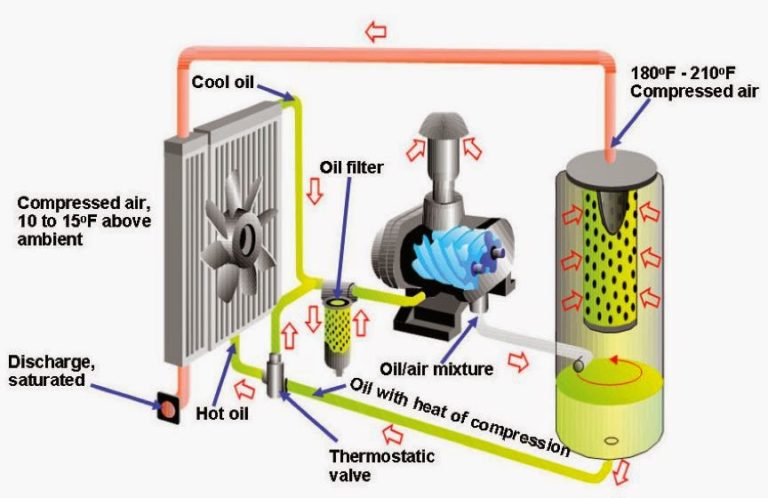 The airend doesn’t just compress air; it compresses an air/oil mixture.  That mixture then flows into a tank called the separator tank or sump.  The oil is separated out of the air by centrifugal force – as the air spins around in the tank, the oil drops out because the oil particles are heavier than the air particles.  Usually there are baffles in the tank that assist with this.  There is also a separator element that takes out nearly all the remaining oil – all but a few parts per million (usually 3 ppm).

From there the oil and air take two separate paths.  The air then goes out through a cooler and then out to your application.  The oil will either go back into the airend or through an oil cooler.  There is usually a thermostatic valve that directs the oil one way or the other, based on the temperature of the oil.  You don’t want the compressor to run too hot or too cold.  If you run too hot you’ll fry the oil, decrease efficiency and burn out other components.  If you run too cold, you’ll never get hot enough to boil off the liquid water that dropped out of the air when it was compressed.   Too much liquid water in the oil will cause airend failure.

An oil-free rotary has different components.  Normally there are two airends and the air is cooled with an intercooler between them.  Typically the gears for both airends are housed in the gearbox and that gear box is lubricated.  An oil seal and positive pressure are used to keep the oil from the gearbox out of the airend.  There’s no separator tank, oil cooler, or thermal valve, but the other components are usually there.