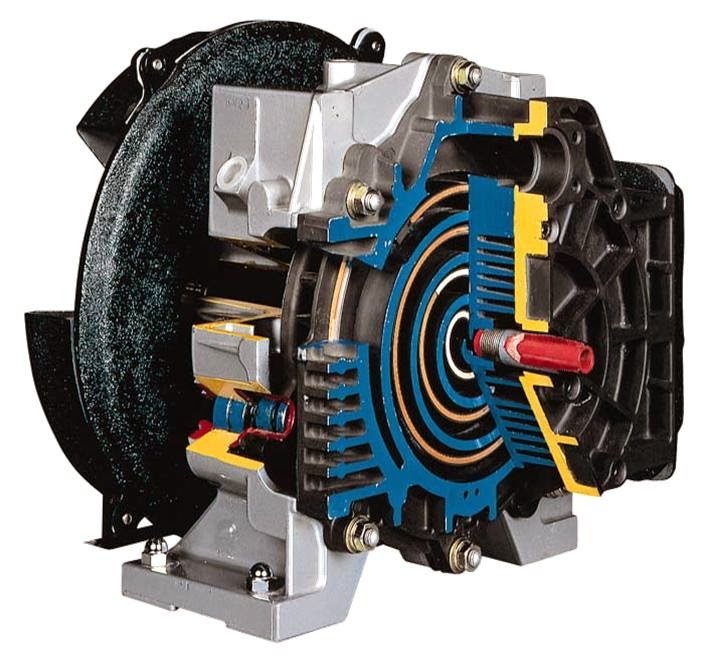 Scroll compressors use two interleaving scrolls, one is moving and one is stationary.  The moving one doesn’t actually rotate – it orbits.  Air gets trapped in the inlet, and ask the orbiting scroll moves, the spiral volume the air is trapped in gets smaller and smaller.  As we discussed before, when you decrease the volume, you increase the pressure.  In the picture below you can see the air in yellow.  In each following step, the space the air is trapped gets smaller and smaller.

Scroll compressors are very popular in medical air field and laboratory air.  The reasons are:

3.  Very, very clean – there’s no oil to leak out.  Even with compressors that are “oil-free” there is usually oil in a gear box.  The scroll compressors have no oil anywhere whatsoever.

4.  Quiet – given the same type of sound-proofing, a scroll compressor will be more quiet than a similar sized reciprocating compressor.  Of course you can make any compressor quiet with the proper sound-proof enclosure, but with a scroll it’s easier and less expensive for the manufacturer to keep the dB to an acceptable level.

5.  Small size – the airend is very small, compared to a reciprocating pump that delivers the same volume.  A rotary screw airend is approximately the same size, but a greater amount of controls and valves are needed for a rotary screw.  The reason this is important to a medical air application is that per the NFPA 99 requirements (the rules that dictate medical air), you must have redundancy.  It’s a lot easier to build in redundancy when the airend is small and you need less valves and controls.  Additionally there is often limited space in a lab, clinic or hospital.

So what’s the drawback?  These sound great – why doesn’t everybody have a scroll air compressor?

1.  The initial cost is pretty high.  These are advanced, well-built, premium machines, and you usually pay a premium for that.  However, that can be made up later by increased efficiency and lower maintenance.  For a place like a lab or a hospital, a premium compressor is needed – you can’t compromise on quality, and they have the capital to pay that premium.  If you’re a small business or home user, it’s probably out of your price range.

2.  They don’t scale well for large volume demands.  These scroll pumps, just until recently, only came in 3hp, 5hp, and 7.5hp versions.  If you needed about 40hp worth of air, you’d have to get a compressor that has eight scroll pumps and eight motors.  That drives the price up.  A system with one 40hp rotary screw airend and one 40hp motor is usually easier to produce and less expensive to manufacture than a system with eight 5hp pumps and eight 5hp motors.  However, Powerex Compressors, just announced that they’re now producing 10hp scroll pumps.  With this announcement, that will allow them to compete on a larger scale.

Again with any compressor, the best way to know what’s right for you is to contact the experts.

That’s it for this post.  Next, we’ll go over claw compressors and vacuum pumps.