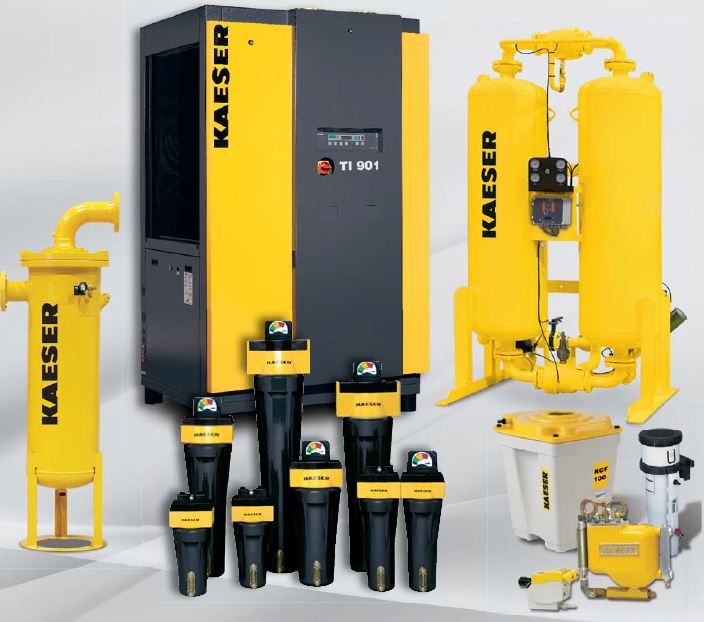 In the previous posts we focused on what’s going on in the compressor, but what happens to the air after it leaves the compressor?  The compressor is just a component in your air system – it’s not the only thing you have to pay attention to.

Think of an air system as a body, and the compressor is the heart.  Your heart may be working fine, but it’s not the only part of your body that you need.  To have a healthy body you need all of parts working correctly.  It’s the same with your compressed air system.

You breathe it every day of your life, but do you really know what’s in it?  Air is mixture of many different things.  Perfectly clean atmospheric air consists of about 78% nitrogen, 21% oxygen, and about 1% of other gases.  However, no air is perfectly clean.  There will always be water vapor in it, and there will always be suspended particles, known as particulates, in it.  A more common term is dust.  There is a lot of dust in the air around us.  There are also vapors and mists of different substances, such as oil or gas, suspended in the air.

All of these things are sucked into the inlet of the compressor and, unless they get trapped in the compressor oil, they are concentrated and shot down the pipe at high speed.  Humidity in the air, which is water vapor, gets squeezed into liquid water.

If you don’t get rid of the water and particulates it will get into your equipment, and often destroy it.  If you’re painting, not only do you have to get rid of water and particulates, you must remove the mists in the air, like oil mist, or they’ll give you fish eyes.  Additionally there are many other applications, such as breathing air, medical air, pharmaceutical, food and beverage, that need a higher purity where you have to take out water, particulates, vapors and mists. 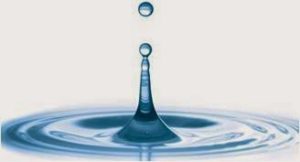 The amount of water suspended in the air as a vapor is often described as humidity.  You’ve heard this term on a weather report, and you generally know that when it’s very humid it’s usually miserable outside.

In the same way, high humidity in your air system is miserable to your equipment.  Many pieces of machinery are very sensitive to the moisture content of the compressed air they receive. 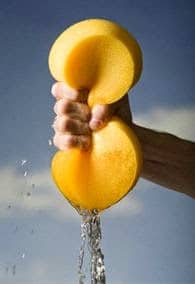 It’s normally the liquid water that destroys your equipment, ruins your paint job, and rusts your pipes. Another way to think about dew point is that hot air will hold more water vapor.  When air cools, the water condenses into a liquid.

When the air comes out of the compressor it’s very hot.  When it goes down your pipe, it cools.  As we discussed before cooler air holds less water, so water condenses (turns from a gas to a liquid) as the air goes downstream.  More liquid water condenses as the air goes down the pipe, and it will keep condensing more water until the air cools to the ambient temperature – the temperature around the pipe.    On a 75F day with 75% humidity a 100 CFM compressor will take in about 18 gallons of water in a 24 hour period.  That water is going to hit your equipment, much of it as a liquid, if you don’t do anything about it.  So now we’ll talk about what you can do about it.

Usually the first line of defense against the onslaught of water is an aftercooler.   There are two-types:  air-cooled and water-cooled. 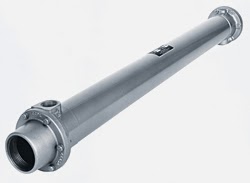 These work much better than the air-cooled versions, but you have to have a chilled water system available – it’s not something that every business has.

Additionally you have to make sure that your chilled water system has the additional capacity to handle the heat of the compressed air.  You can also use municipal water to run through it, but that gets expensive.

Okay, so we cooled the air with an aftercooler and it dumped a bunch of water into the system – what do we do with water?  Either you have to drain it right then and there or run it through a filter or dryer. 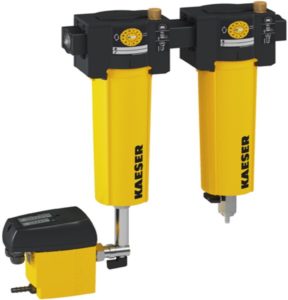 If you’ve seen a compressed air system, then you probably have seen compressed air filters.  There are different types of filters, but for now we’ll talk about the ones that take out water.

The filters designed to take out water either use centrifugal separation, mechanical separation or both.  In the interest of not making this post too lengthy we won’t get into how that works.  What you need to know is that filters will take out 95-99% of the liquid water present.

However, they do so at the temperature of the air going through it, so the dew point of the air is the temperature of the air when it goes through the filter.  That means if the air cools later down the line, more water could drop out.  You can’t just put a filter after a compressor and then expect the air to be completely dry after 100′ of pipe or hose.  It will be mostly dry, but you might get a drop or two of water occasionally.  This is fine for most shop tools, but not for other processes or equipment.

That’s why filters are called “point of use.” Unless there is a dryer before them, they are best installed right before you use the air.  The basic rule of thumb is that you have about 25-50′ of hose or pipe after a filter before you see more water.  You can install drip-legs in the pipe down the line to catch any additional water that may form.

Make sure you’re checking the drains on the filters.  If you have a manual drain, make sure you remember to open it to drain out the water.  If you have an automatic drain, check the site glass to make sure it’s working.  Most filters have internal elements that need changing between 6 and 12 months.  If you don’t change the elements when they need to be changed, then you’ll have problems.

Dryers are machines that dry compressed air so much that they actually lower the dew point.  There are a few different types, but the main ones are refrigerated, desiccant, and membrane dryers.

Refrigerated dryers are very simple.  They use a refrigeration system to cool the air, and then they run it through a filter.  Refrigerated dryers give you a dew point somewhere between 35F and 60F, depending on their design.  Normally you get around 38F when sized correctly.  That means if I run the air through a refrigerated dryer and it gives me a dew point of 38F, then there will be no liquid water that will form downstream unless the air around the pipe is less than 38F – no matter how far you go (there are some rare exceptions to this, such as adiabatic expansion).

For a large majority of industrial applications a dew point of 40F is more than enough.  If you are up north, and your pipe will be exposed to temperatures lower than 35F, then a refrigerated dryer won’t work.  If you have a specialized process that requires a lower than 35F dew point, then you also have to use a different type of dryer.

Please notice that I emphasized when sized correctly.  Refrigerated dryers are some of the most commonly missized equipment in the industrial world.  Most refrigerated dryers are air-cooled and their capacity is greatly affected by the ambient air and the temperature of the air coming into it.  All dryers are rated at a “standard”.  Usually that standard is 100F inlet temperature, 100F ambient temperature, and 100 psi (high temp and high pressure dryers use different standards).  Higher ambient temperatures and inlet temperatures make the dryer perform worse, and higher pressures make it perform better.  In the literature of every dryer brochure they show you “correction factors”  which will tell you how to calculate the actual CFM of the dryer in the conditions you’ll put it in.  It looks like this:

Most customers would have just bought the 100 SCFM dryer, because it appears to match up with the 100 SCFM compressor they have.  Then in the summer months it could possibly break or not work properly.  The “S” in SCFM means standard.  The manufacturers cannot list every possible condition a customer could put it in, so they give you the standard and the correction factors.  Then it’s up to you to do the math. 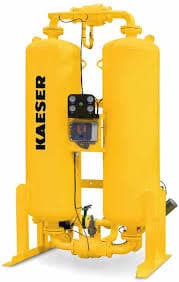 If you need a lower dew point than 35F, then you’d have to go to a membrane dryer or a desiccant dryer. A membrane dryer uses osmosis to bring the dew point to as low as -40F. A desiccant uses desiccant beads to adsorb the water in the air. They can dry the air to as low as -100F. Most of you will never need that low of a dew point. However, if you do, there’s a price to pay. All membrane dryers and most desiccant dryers use “purge air.” Long story short- they blow about 10% of your compressed air to atmosphere as part of the drying process. This is 10% of your air compressor lost, just because you need a lower dew point.

Because of that, it’s not advisable to use them unless you absolutely need a dew point below 35F.

The large expensive desiccant dryers that do not use purge air work extremely well when maintained correctly.  These are usually used for big factories that need a low dew point.  They have the capital to afford the large initial purchase, and the amount of CFM they save more than makes up for the price on the dryer in energy savings.

Desiccant and membrane dryers also have correction factors for pressure and temperature,.  Make sure you pay close attention to the chart before you buy.

There are some other kinds of dryers, such as deliquescent dryers, but they are rare and only used for special situations.  We won’t cover them in this post.

So, as you can see, an air compressor can and will send a lots of water down your line. If you don’t catch it, it can ruin your equipment. Luckily you have many different ways of removing that water from the system. Ask your equipment manufacturer what dew point they require. If they don’t have a dew point requirement, and just say “dry air,” then a refrigerated dryer is usually sufficient.

Remember to size the dryer or filters correctly. The SCFM rating is just the rating at standard conditions. Find out what the correction factor for your conditions are and adjust appropriately.

Water is just one part of clean air treatment. Next week, we’ll talk about how to remove other contaminants from your compressed air.